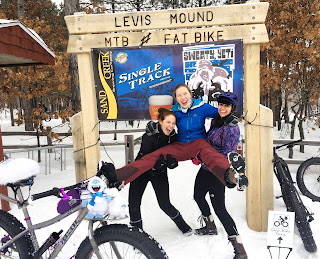 FWD Ambassador, Melody, shares with us her Sweaty Yeti race report! Melody and Team FWD did the team race (or you could race solo) The Sweaty Yeti race was held at Levis Mound up in Neillsville, Wisconsin.


This is my first ever race report, so please bear with me! Someone requested that I do a race report on the Triple D race this year, and, unfortunately, I didn’t pay attention enough to have anything meaningful to say. I went into the Sweaty Yeti with the intention to pay more attention to the event to see if there would be anything worth writing about, and I’m glad I did!

The biggest thing I want to highlight is that if you haven’t made it out to Levis Mound Trails during winter, you absolutely need to put this on your winter riding list. I took the Friday before the race off and traveled up with my faithful pup, Presta. We knocked out a solid 8.5 miles on the groomed trails, which turned out to be the best riding of the weekend. As a side note to those of you with trail dogs, Levis is a great place for them, however, dogs can mess up groomed snow surfaces before fat bikes do, so be mindful of the conditions and your dog’s size. A lot of places that groom trails forbid dogs! 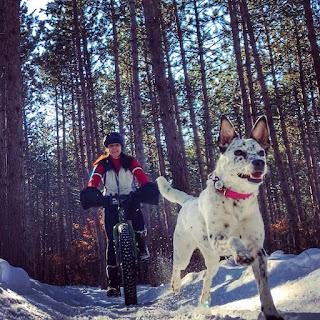 After riding, I headed into Black River Falls to pick up dinner and go the pre-race shindig at Sand Creek Brewery. I assumed I wouldn’t know anyone there and make a quiet exit after a beer and finishing my dinner, but soon as I walked in, I realized I actually knew some people there! That felt so incredibly cool to know I’ve been in the riding scene long enough to know people at events and chat comfortably, instead of feeling like a complete outsider. If there’s any one thing I love about mountain biking over other outdoor recreation activities, it’s the community that forms around it.

The next day, my group and I got to the trailhead around 9:45 AM. Check in went smoothly, and we worked on dialing our bikes in for the current snow conditions. I was riding on a team with two other women for Fearless Women of Dirt, Annie and Kate. They apparently decided that I was going to go first, which meant I got to have my first running start. Let me tell you that wasn’t the most pleasant experience in the world! They piled up all the snow from the overflow parking lot into Mount Yeti, and we had to run up it and around back to the bikes. Overall it generated a lot of laughs, and it was at least a good way to warm up a bit before getting on the bikes.

I was feeling gassed from riding the day prior by the time I got on my bike for the race, and that was compounded by the trail conditions. Between the chaos of the mass start and the soft snow conditions, the double track trail was extremely rutted up by the time I got it to it. There were a few rideable lines, but as soon as you fell off it, you were toast, and there were always at least three riders directly behind that I’d have to let pass before I could get back on the good line.

The double track turned to singletrack before long, and that first section was completely not rideable. I lost a lot of time by being stubborn trying to ride, just to get stuck in churned up snow. A lot of people ran sections like that with their bikes. In retrospect, I wish I had run as well, but I felt like I was going to make the trail surface worse if I did that.
At 1 mile in, it finally smoothed out enough and I could ride the rest of the two miles back to the chalet.

This is where I discovered the biggest mistake of the day; I didn’t consult the race course map or ask anyone about it, I just assumed my memory was correct. 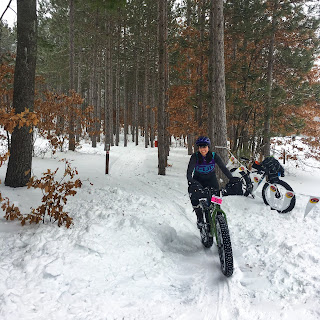 It turns out, this race course takes you right past the start just to go up a huge hill. I kept thinking it was a simple out and back to allow the transitioning riders time to get ready; it was anything but. This section was a full extra mile of the race course that I wasn’t expecting, and it had two hills and two big descents. Silly me for not double checking the course map! The descents were quick and quite a bit of fun, but the trail conditions made it super never wracking and I bailed quite a few times out of sheer uncertainty on how my bike would react. Times like these are when I wish I was a bit more brash about crashing and would push my limits more. I also kept wishing I had the stability and extra float of 5” tires vs. my 3.8s at that time. Oh, the things you wish for mid-race!

Eventually, the course flattened out to double track and I pushed through the finish line and transitioned with Kate. My official time was 1 hour, 24 seconds. I felt absolutely wrecked by the time I finished my lap and knew between the race cutoff of 3 hours and my pace, that there was no way I was going out for a second lap. Kate finished her lap at 40:48, and Annie at 49:41.

I’m going to admit I looked through the lap times seeing where I stack up overall, and while I’m not the absolute slowest, I am in the top 5 slowest team racers this weekend. I know I’m not the fastest rider out there, but I was a bit disappointed at how much I struggled this race. I think a large part of that was riding so much the day before. I didn’t quite intend to do a full 8.5 miles when I went out, but I was having too much fun riding the trails to turn around before I was tired. This is a great exercise for me in self-kindness: the point of this race was to have fun, and I need to focus on that, not my physical performance. I want to work on getting faster this year, but I need to honor where my fitness level is currently at. I should be stoked that I’m in shape enough to even attempt doing these things because at one point in my life there’s no way I could’ve even finished this race. I had solid handling for some of the gnarlier sections of trail, and that’s such an improvement for me. Now the next thing to focus on is maintaining speed! 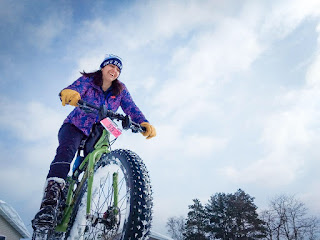 The after-party of this race is also something worth talking about – there are a ton of door prizes, Sand Creek provided a keg, and there was a potluck in the chalet. I went for a short ride that afternoon as well, and the trails got much better throughout the day between all the riders on it as well as a bit of freezing rain.

All and all, this is a great event worth checking out. I had a ton of fun and I left with more motivation to work on becoming a faster rider. I will most definitely be coming back during the winter to ride those trails!

Huge thank you to all the volunteers at Levis Mound for making it happen; I hope to come back next year.
at March 03, 2019 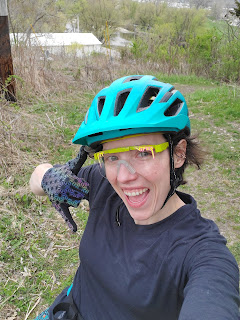